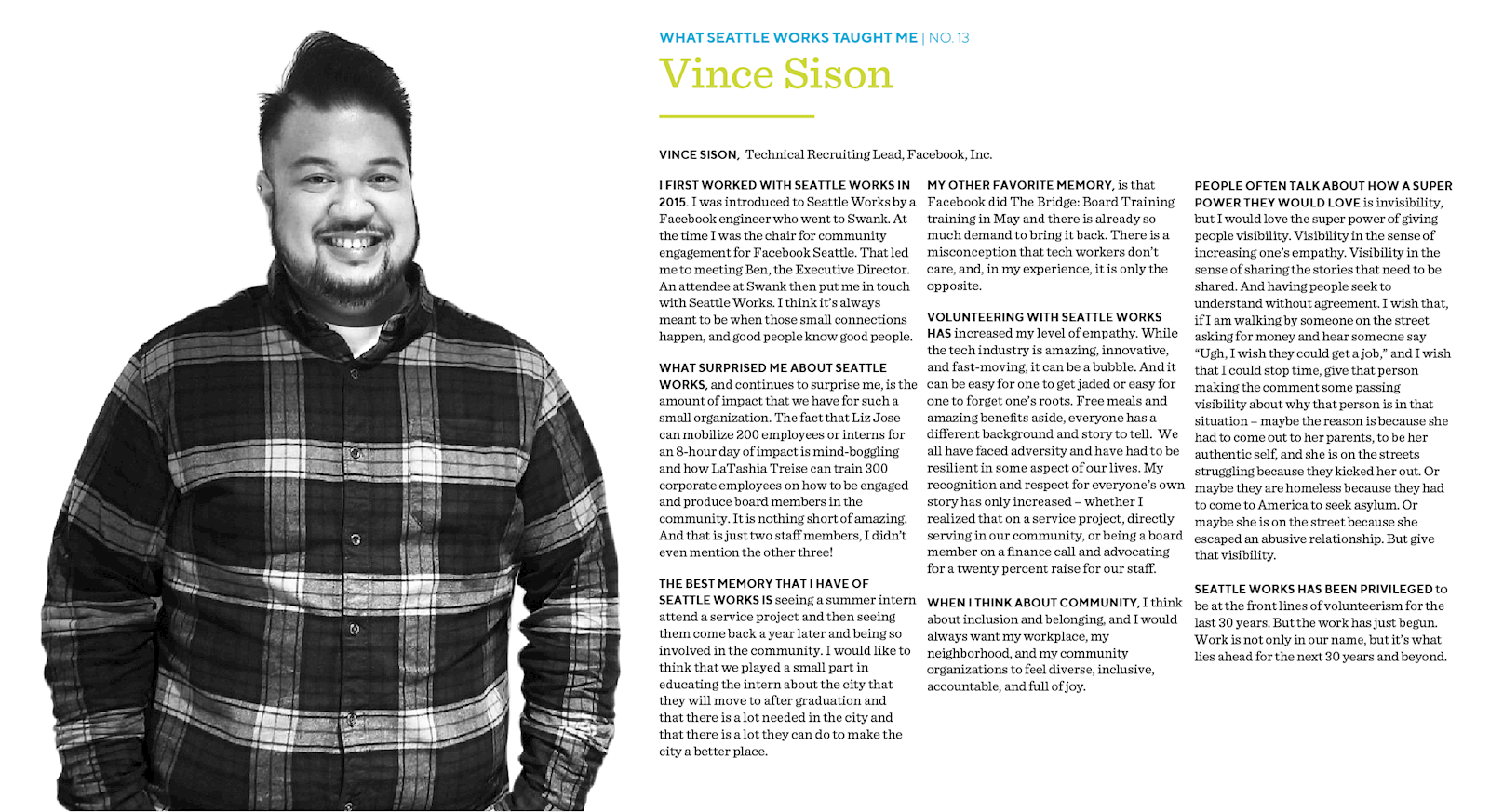 I first worked with Seattle Works in 2015. I was introduced to Seattle Works by a Facebook engineer who went to Swank. At the time I was the chair for community engagement for Facebook Seattle. That led me to meeting Ben, the Executive Director. An attendee at Swank then put me in touch with Seattle Works. I think it’s always meant to be when those small connections happen, and good people know good people.

What surprised me about Seattle Works, and continues to surprise me, is the amount of impact that we have for such a small organization. The fact that Liz Jose can mobilize 200 employees or interns for an 8-hour day of impact is mind-boggling and how LaTashia Treise can train 300 corporate employees on how to be engaged and produce board members in the community. It’s nothing short of amazing. And that is just two staff members, I didn’t even mention the other three!

The best memory that I have of Seattle Works is seeing a summer intern attend a service project and then seeing them come back a year later and being so involved in the community. I would like to think that we played a small part in educating the intern about the city that they will move to after graduation and that there is a lot need in the city and that there is a lot they can do to make the city a better place.

My other favorite memory is that Facebook did The Bridge: Board Training in May and there is already so much demand to bring it back. There is a misconception that tech workers don’t care, and, in my experience, it is only the opposite.

Volunteering with Seattle Works has increased my level of empathy. While the tech industry is amazing, innovative, and fast-moving, it can be a bubble. And it can be easy for one to get jaded or easy for one to forget one’s roots. Free meals and amazing benefits aside, everyone has a different background and story to tell. We all have faced adversity and have had to be resilient in some aspect of our lives. My recognition and respect for everyone’s own story has only increased – whether I realized that on a service project, directly serving in our community, or being a board member on a finance call and advocating for a twenty percent raise for our staff.

When I think about community, I think about inclusion and belonging, and I would always want my workplace, my neighborhood, and my community organizations to feel diverse, inclusive, accountable, and full of joy.

People often talk about how a super power they would love is invisibility, but I would love the super power of giving people visibility. Visibility in the sense of increasing one’s empathy. Visibility in the sense of sharing the stories that need to be shared. And having people seek to understand without agreement. I wish that, if I am walking by someone on the street asking for money and hear someone say “Ugh, I wish they could get a job,” and I wish that I could stop time, give that person making the comment some passing visibility about why that person is in that situation – maybe the reason is because she had to come out to her parents, to be her authentic self, and she is on the streets struggling because they kicked her out. Or maybe they are homeless because they had to come to America to seek asylum. Or maybe she is on the street because she escaped an abusive relationship. But give that visibility.

Seattle Works has been privileged to be at the front lines of volunteerism for the last 30 years. But the work has just begun. Work is not only in our name, but it’s what lies ahead for the next 30 years and beyond.

Hear from us on social media!